An Asian Twist to an Old Classic for Chanukah

There has been a frying fiesta going on in my house. Chanukah celebrates the miracle of just a tiny bit of oil lasting for eight whole nights. It is only appropriate to give oil a central role in this holiday. Therefore, the two cardinal foods of Chanukah are latkes (potato pancakes) and sufganiyot (doughnuts). Don’t get me wrong, there’s absolutely nothing wrong with the classics – plain old potato pancakes or jelly doughnuts. However, I like to have a variety of flavors and each year, I try a new take on the prototypes. Already, I have given you a falatke recipe that mashes up falafel and latkes. Today, I will show you another new fangled take on the latke.

My four year old has been begging, pleading, beseeching me to make her carrot ginger dressing. She loves to eat salad and discovered the dressing at a friend’s house. It has been a full two weeks of yearning, and she has yet to get her wish, poor child. Don’t ask me why. It makes no logical sense. However, each time we set out to make this simple dressing, something happens and we don’t follow through. On Sunday morning, we bought all the ingredients for the salad AND the dressing. Then, someone wasn’t feeling well (eh, ok…it was me) and we never got to the kitchen.

With all these beautiful ingredients sitting in my fridge, I decided to make the dressing. Then I got side-tracked by the need to make latkes for a Chanukah party. As I was making the regular latkes, I rummaged through the fridge for a snack. I found the carrots and the ginger and had an epiphany: I would make Carrot Ginger Latkes! Such an easy mixture to make and the results are divine. Plus, with cold and flu season sweeping our neighborhood, any extra help counts. The ginger in these will hopefully help us fight off bad germs… 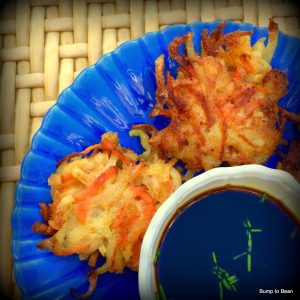 Grate the potatoes, onions and carrots. Honestly, I find the food processor to be the best and fastest way to go. Cut the potatoes into 2 inch chunks so you don’t get long strands. Now comes the important part (much more than whether you grate by hand or processor).

Place the grated veggies in a large bowl and cover with cold water. Let them sit for 5 minutes. Then, taking handfuls of the vegs, squeeze out all the liquid and lay on a towel (or 3 layers of paper towels). Roll up the towel and twist it to get rid of the excess moisture. Discard the water in the bowl, but leave a little bit of the starch that has pooled at the bottom. Put the grated vegs in the bowl.

Stir in the remaining ingredients.

Heat up 1/4 cup of oil in a large, heavy skillet over a medium high flame, until hot but not smoking. Work in batches and fry up your latkes. Depending on the size of latkes you are making, spoon the batter into the pan in mounds, then press down with a spatula. Turn the heat down to medium. Once you notice the edges turning brown, flip the latkes. Brown the other side (around 3 minutes). Drain the latkes on a paper towel lined baking sheet.and sprinkle lightly with salt. To keep them warm, place the latkes on a wire rack set in a shallow baking pan in the oven set to 300 degrees.

Note: To make ahead – lay the latkes on a baking sheet, cover with foil and then plastic wrap. Place in the freezer. Then, heat them up in a 425 degree oven for 15 minutes before serving.

Stir together the tamari/soy sauce, water, rice vinegar and sugar until the sugar dissolves. Stir in the scallions right before serving.

Note: You can make the sauce (without the scallions) three days ahead of time and keep it chilled and covered. Add the scallions in after you’ve brought it up to room temperature.